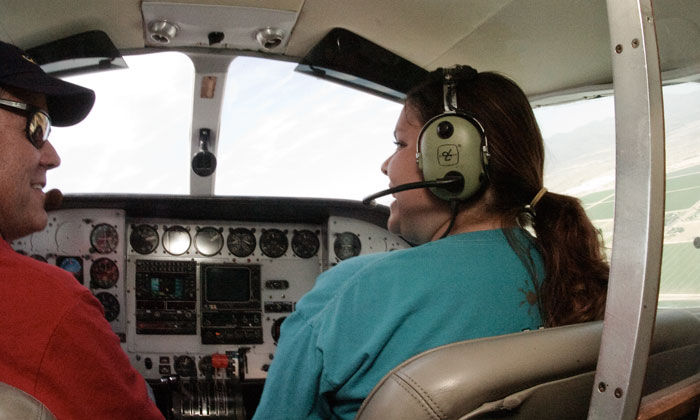 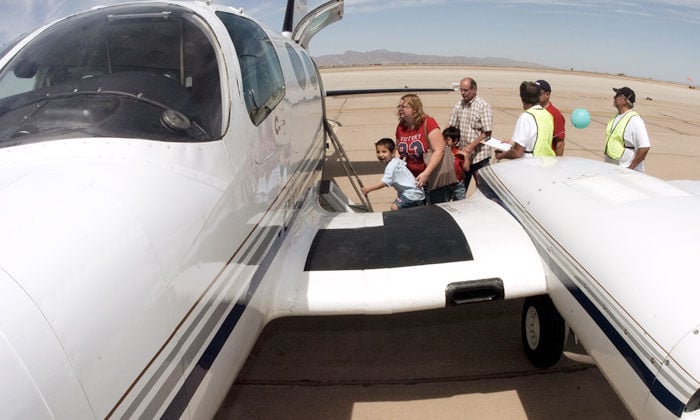 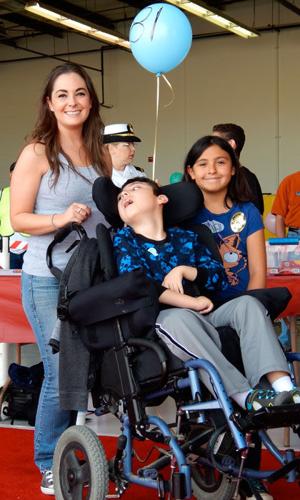 Smiles brighten their faces as they walk off the plane, on a red carpet, amid shouting cheerleaders Saturday afternoon.

The Forsman family of Litchfield Park has just flown in a private airplane for the third time through the annual Sky Kids event at the Phoenix Goodyear Airport.

Sky Kids is a nonprofit that seeks to help special needs children build self-esteem through flight.

Nine-year-old Orion has had cerebral palsy from birth, brought on by a seizure in the womb, his mother, Jen, said.

Orion had an entourage of family members join him on his fun flying adventure. His grandfather, Greg, mother, and cousins Bella and Sierra all flew with him.

“He loves it, it’s his favorite thing,” Jen said beaming. “Me, not so much. But he enjoys it so I take one for the team.”

Many of the children with special needs or their guests are able to take the steering wheel, if they can, and fly the plane once the machine has stabilized and gone into autopilot.

On this trip in particular, Bella got to take the steering wheel for her first time.

The pilots who fly with the children and their families do so on a volunteer basis.

“It’s a big expense for pilots, but they don’t care,” said Bill Antonucci, founder and director of Sky Kids. “Pilots are always looking for an excuse to fly anyway.”

Antonucci said he was part of something similar to Sky Kids when he lived in Texas, and decided to bring it to the West Valley when he moved.

A total of 25 pilots volunteered their time and planes; nearly 300 other volunteers were present, as well, to direct traffic, assist in face painting and cheer on the children.

Goodyear police and firemen set up displays and vehicles for children to play in, and a couple of War Bird aircraft from World War II were there, as well.

A total of 148 children were signed up to take flights and did so between 8 a.m. and around 7 p.m., with the Phoenix Fire Department cooking up dinner.

“We just want to thank all the volunteers,” Jen said. “It’s amazing what all the community does.”

In addition to flying and getting cheered on while crossing the red carpet, Sky Kids children are awarded a Sky Kids pilot’s certificate and wings pinned on their outfits.

Antonucci said the rest of the year is spent fundraising for the event, which costs around $15,000.

His favorite part is seeing the children with joy on their faces, he said.

“The kids just love this, and another very rewarding part about it is to see how the parents of these children, who really never get a break, see their children enjoy themselves,” he said.

Opinion: Only the victim deserves our sympathy

The man who raped and murdered Deana Bowdoin was put to death by the state of Arizona on May 11 at 10:30 a.m. This was 44 years, four months and four days after the homicide in question — or about 44 years too long by my reckoning.

T.S. Eliot made the celebrated observation that “April is the Cruelest Month” in his critically acclaimed poem “The Wasteland,” published in 1922. A century later, a small group of U.S. senators gathered late in that cruel month to formulate a cruel fate for our nation.

Opinion: Lost in Adel’s death is a recognition of her humanity

She served as Maricopa County attorney for 900 days, the first woman to hold the office.

Opinion: The latest sign of lost youth is pickleball’s popularity

Life sometimes presents signs that you have completely given up on your youth. An example: You proudly present your AARP card to request a senior discount at the restaurant where you’re having dinner.

National Nurses Week is May 6 to May 12, an annual celebration that recognizes the critical role nurses perform in our hospitals and for our community. This year, we recognize our nurses for their continued commitment and unfailing dedication to our patients and their families, and for alway…